For the past several years, a large voting bloc of this country has been purposely maligned and falsely characterized as a fringe element of the population. It has been subjected to ridicule and targeted by liberals as out-of-touch, racist, homophobic, divisive and polarizing. Yes, I'm talking about conservatives.

Now, however, there is a new term being bandied about. That term is "populist".

1 : a member of a political party claiming to represent the common people; especially often capitalized : a member of a United States political party formed in 1891 primarily to represent agrarian interests and to advocate the free coinage of silver and government control of monopolies
2 : a believer in the rights, wisdom, or virtues of the common people


Liberals, on the other hand, have worked hard to re-brand themselves as progressives, which implies that anyone not in their ranks are regressive.


(Not that it means anything, but my personal preference is 4 a)

Now, given that these three competing terms, conservative, populist and progressive, are readily used by both liberals and the mainstream media punditry to describe the current political landscape, what can we learn? The two new descriptions, populist and progressive, when taken by definition, are telling. When combined with the term conservative, we have a good understanding of what liberals think about the overwhelming majority of the population.

Conservatives, by any liberal's point of view, are a progressive's antithesis. They stand in the way of progress. A liberal's use of the term "populist" refers to the common, uninformed tendencies of the mass population, neither conservative or progressive. A "populist" viewpoint is generally not worthy of consideration within a progressive's political discussion since it is uninformed.

So, what are we left with? Liberals are trying to convince you that this country is composed of three main groups:

Populist - those that don't vote and who's opinions aren't worthy of consideration.

Conservative - those voting with a regressive ideology.

Progressive - those voting in agreement with a liberal ideology.

Consider Gallup's latest findings regarding the overall political ideology of Americans. You'll begin to understand why "populist" is used in a derogatory manner by liberals and partisan pundits: 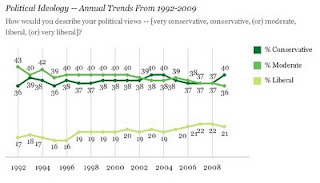 It's no wonder that the liberals and mainstream media have had to resort to a semantic souffle in an attempt to marginalize the general population. The "uninformed" populist has turned against them.
Posted by ehvogel at 2:38 PM