Remember our storms of conflict

It's so dismaying to see the dismal level of American history being taught within our government-supported education system. I remember my teenage daughter telling me that her 8th grade teacher told her that Lincoln was a hypocrite because his family members were slaveholders. When I challenged her, she only relented by suggesting that maybe she misunderstood him. In my mind, the lesson was clear. How could a teacher ever impart such an impression on a child that they would repeat it 3 years later?

With such a rich history of independence and liberty, what shall become of our present when its history is written? Our country's defining moments are usually cast within the storms of conflict that we have ample examples to share: The American Revolution, The Constitutional Convention, The Civil War, etc. Notice my use of a capitalized "The". It introduces a moment in history that is significant in its relevance to mankind. There are others that are noteworthy: The Magna Carta, The Napoleonic Wars, The Age of Enlightenment.

Indeed, what shall become of our present? How will it be remembered in history? Will it be remembered at all, or will it merely become a footnote in history, not commanding a place among "The"? If we had to define today's emergence of conservatism and the tea parties, how would we do it? Would it be "a political movement", "a short-lived protest" or "The Awakening of Americanism"? Will we define its leaders as "right-wing talk-show hosts", "fringe elements of the Republican Party", or "The Sarah Palin Phenomenon"?

After all is said and done, will this period of time command a place in history as a defining moment and qualify as a "The"?

Only time will tell us how history will treat this moment. The beginning of the story could be November 2, 2010. How would you define this moment? History just might remember your characterization.
Posted by ehvogel at 7:59 PM 0 comments

Keep a close eye on eBay

Jake Tapper reports that Barack Obama has undertaken an extreme makeover of the Oval Office, blaming George W. Bush, no doubt. No details yet, but my guess is that we should begin monitoring eBay, just in case. Being that Obama saw it fit to return a bust of Winston Churchill to England, it seems unlikely that he'll want to keep anything that his predecessor my have done in the way of decorating.
Posted by ehvogel at 5:16 PM 0 comments

Movie Trailer: I Want Your Money

I was recently feted with a family video of both me and my sister's First Communion in the Catholic Church. Outside of seeing the visual of us as 8 year-olds and my mother as a beaming 40 year-old, I was struck by something else. I watched as our parish priest talked with the principal of our school, while smoking a cigarette. It immediately brought back memories of being an altar boy and smelling the tobacco on his breath during mass. It also fueled thoughts of today.

How surreal would it be to see a priest yukking it up with a nun at a grade school while smoking a cigarette? It would be like watching an episode of "Mad Men", albeit set in a seminary. Nonetheless, our pastor, Father Ed, was a very pious and honorable man who commanded untold respect amongst my school-mates, as did the principal, who's name escapes me. They taught us the ways of the Catholic Church and, in so doing, taught us about life in our journey to Heaven.

A year after my first communion, John Kennedy was assassinated. I remember the principal getting on the PA and announcing the grim fact that our President had been shot. She implored all of us to pray for his recovery, not knowing that the attack had proved to be fatal.

Such was my experience, however influenced by my religious educators. What of Sasha and Malia, the children of our current President? How might their experiences differ from mine? What did they learn in Sunday School, assuming they went? Did Jeremiah Wright hand out apples and oranges on Three Kings Day, commemorating the end of Epiphany, the twelfth day of Christmas? Or did he provide mentoring on other remembrances, such as the emancipation of blacks?

I don't ever recall paying homage to an event of the last 500 years, outside of my experience with President Kennedy's death. My mentoring was rooted in The Bible and its relevance to the Catholic Church, not an event that occurred during our country's collective history. The lessons were bigger and targeted the human experience. We learned how to be better Christians within the context of our lives, praying for a better future.

How does one reconcile the beliefs of Christianity with a Jeremiah Wright or a Jim Wallis? How do we discern the difference between a charlatan and a true man of God? How do we decipher The Bible, when we're taught by those that would subjugate its meaning for political gain? What do we make of anyone that would put politics before the Word of God?

Religion should be a call to the providence of one's soul, not a call to arms. It should not require us to right a collective wrong, but to redirect our personal path to God and to our own salvation. In so doing, the errors of humanism are diminished and the demands of human intervention on life are relegated to a mere asterisk in history. God calls us to His midst, not to further a human cause.

I love this gal. She's a rising star....and a conservative one at that!

How a real CIC acts

The bull knows no bounds

Must have smelled the cotton candy.....

Spain: 30 injured as bull leaps out of ring
Posted by ehvogel at 2:31 PM 0 comments

Why Won't the Left Fight for America?

I'm taking a break from my vacation to pose a question that came up over dinner tonight: why won't the left fight for America?

My observation was this: the American military is a volunteer force and, as such, is overwhelming conservative, a reflection of the background of our soldiers. Conservatives, I said, fight for their beliefs. Liberals do not.

Our country is currently under threat from BOTH without and within. The current efforts in the war on terror have seen the rise of the greatest volunteer armed forces in the history of the world. Why?

Our freedom was and continues to be threatened by the dark forces of radical Islam. Those "country boys" and "hicks" saw all they needed to see on 9/11. They flooded the recruiting stations of the various branches of our armed forces and helped turn back Al-Qaida in Iraq and, now focused, are doing the same to the Taliban in Afghanistan. Given the ability to do so, I have confidence that they will succeed. But what about those battles within?

I have no doubt that we'll see the same phenomenon WITHIN our country if the domestic political environment continues to deteriorate. If the 2010 elections do not forestall the growth of government and reign in spending, we'll only have one more election to effect a difference. Although a lot of change [and damage] can occur to our country during the period between this year's election and 2012, I believe we will see a further mobilization of conservative Americans not seen since our Revolution.

We are seeing a rebirth of the elements that created our country in the first place. I don't think those elements will be denied their desire to return to the foundations enumerated in our Declaration of Independence or in our Constitution. I pray that we will never come to armed conflict within our society, but I do know this: conservatives will fight and die for our freedoms.

Will the left do the same, or will they line up lawyers and legislators to defend their lines? We can only hope so.

Much has been written about Sarah Palin's looks, both in a derisive sense and an envious one. Conservative women are, after all, the girls next door. They are the ones that raise children, attend PTA meetings and focus their lives on their family. They are, in a word, familiar.

Leftist women seem to have a harder edge, born out of their struggle to gain recognition for something other than their feminine or motherly qualities. They rail against men for the perceived domination of women in the workplace and elsewhere. They champion alternative lifestyles in the hope that such efforts will validate their own existence. They've long forgotten the joy of being a woman within the context of Judeo-Christian society. To most Americans they are only acquaintances.

When I first saw the cover of Sarah Palin's new book, I was struck by its warmth. 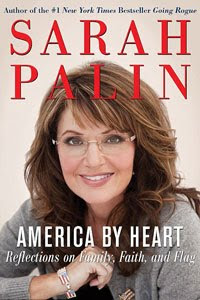 Her long hair flows down over her shoulders and frames her face in a way that highlights her smile as one of enduring kindness. It is a smile reserved for family and friends, one that's familiar and welcoming, both genuine and natural. It is a mother's smile that welcomes a child's approach to be held and nurtured. It is a smile that says she can be trusted to shelter and protect. It is an honest look into her heart, a caring and understanding one.

We live in troubling times. We long for leaders that steadfastly support our ideals, not those who seek to divide us by political calculation. For most of us, we remember those times in childhood when we received the warm embrace and the reassurance of closeness. Sadly, not all of us can claim the same experience, which is why Sarah Palin is so easily misunderstood by the left. She embodies the memories of the majority of Americans who grew up in a loving and caring family. She has that cuddle factor like no other politician in memory. And, make no mistake about it, she is the "mama grizzly" that evokes the protective instinct in all of us. It is a commitment to protect our foundational roots in liberty, something worth fighting and dying for.
Posted by ehvogel at 6:31 PM 2 comments

How do you stop a blow-torch that's named Sarah?

I don't know how the title came to mind, but it's reminiscent of this.

At any rate, consider this:

Obama appears before the AFL-CIO and we get this Facebook post, skewering Obama for his hypocrisy. Did the media take notice? You betcha!

Obama continues to pursue his lawsuit against Arizona, trying to stop the state from enforcing federal immigration law. Sarah Palin responds here and the lamestream media has a conniption fit over it, ignoring its own leftist's comments.

An ill-considered plan has been put forth to build a mosque in the shadow of the World Trade Center, ground zero on 9-11. Sarah responds and ignites an national debate, here, here and here.

In many ways, Sarah is responding to national events with a voice that echoes mine. Every new Facebook post elicits a fist-pump and a resounding "YES"!

I don't remember anyone in my lifetime that was so willing to speak out against things that rubbed them wrong and ended up speaking my opinion. I certainly hope she continues to act as an outspoken, verbal blow-torch that voices my opinion on a whole host of national issues.
Posted by ehvogel at 9:55 PM 1 comments
Labels: sarahpalin

In a resounding display of displeasure with the passage of Obamacare, voters in Missouri have spoken:

Courtesy of Chicks on the Right


I refer you to a piece I did several months ago.
Posted by ehvogel at 11:18 PM 0 comments

AGENDA: Grinding America Down (Trailer) from Curtis Bowers on Vimeo.