Only Reagan does Reaganesque

I submit that there can be no one who compares with Ronald Reagan. 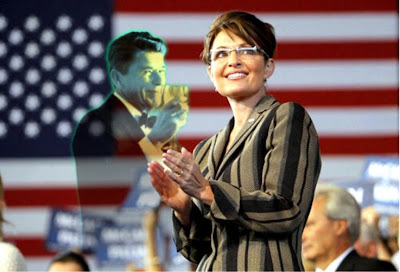 As we fast approach February, let's all remember that February is the one hundred year anniversary of Ronald Reagan's birthday. Coincidentally, February is also the birth month of Sarah Palin, who holds up Ronald Reagan as the icon of her political philosophy.

Although you can attempt to find similarities between Ronald Reagan and Sarah Palin, the truth is this: they have both had a profound influence on the politics of our lives in unique ways, fueled by their charismatic and individual personalities.

Why do their messages resonate the way they do, both with the left and right? It is because of their unabashed optimism in the face of all that confronts us as a nation. Burnished by their foundational beliefs in God and the United States Constitution, they are unapologetic standard-bearers for what we know as American exceptionalism.

Please take the time to show your appreciation for these two unique individuals and join us in celebrating Reagan/Palin Appreciation Month!
Posted by ehvogel at 7:03 PM 0 comments
Labels: reagan, sarahpalin

The advance of technology is amazing. In just a few short years, the Internet has transformed American society. Some may say for the bad, but from my perspective, it's all for the good.

We now share photos and videos online while corresponding to family, friends and associates through various social media. We shop online, research projects online and obtain our news online. We do all these things in the here and now, as we need to.

Remember email? I defy you to find a teenager that has sent an email in the last 12 months. Their preferred means to communicate is by sending text messages on their cellphones or, as they get older, linking up on Facebook. By the time adults hear about anything having to do with anything related to school, kids have already disseminated all things related to, well, whatever. In a teenager's world, communication is immediate, relevant and proactive. After all, no teenager wants to be behind the curve on breaking news!

For adults, how does this technology aid us? After all is said and done, baby-boomers are certainly tech-savvy while our parents are still trying to figure out email, albeit grudgingly. The point is that they WANT to learn. Their world has been defined by the nightly news, hand-written letters and the Sears catalog. They are desperate to gain access to all that is going on. Why? Because, like teenagers, no one wants to be behind the curve when it comes to news.

Now, all of a sudden, we have iPods, iPads, laptops, computers and all sorts of things that make accessing the Internet fairly simple. Baby-boomers have taken notice. They no longer rely on the nightly news to find out the "truth", which used to be called "the news". They have cable, satellite and fiber optics to access programming. They have Netflix, Hulu and other outlets to access, well, whatever. All major retail outlets have websites that you can buy from or peruse before you buy at the store.

In a world of instant access, the mainstream media is being shown to wear The Emperor's New Clothes. In light of the horrific act that took place in Tucson at a Congresswoman's event at a neighborhood grocery store, a vast majority of Americans dismissed the mainstream media's reporting. They dismissed the ridiculous assertions that Sarah Palin had somehow "incited" a shooting because she used the metaphor of "targeting" on her PAC website during the 2010 elections. They dismissed any suggestion that the Tea Party was responsible. They learned the truth from their contacts on the Internet. They did what teenagers do and searched out the truth from sources they felt comfortable with.

If you think that this event is an anomaly, thing again. More Americans are choosing to obtain the "truth" from their own research on the Internet than ever before. My 88 year-old mother just sent me a message (on the iPad she got for Christmas) that she identified me as her son on Facebook. She's trying very hard to be a part of the goings-on, despite her failing eyesight. She not unlike the teenager that just doesn't want to be the last person to hear about what's going on. In fact, she's like everyone of us: she doesn't like not knowing. She just wants to know the truth. To her, The Emperor's New Clothes aren't there.
Posted by ehvogel at 7:48 PM 0 comments

On the eve of our new Congress, I thought I would reminder the incoming freshman Congressmen why they were sent there.