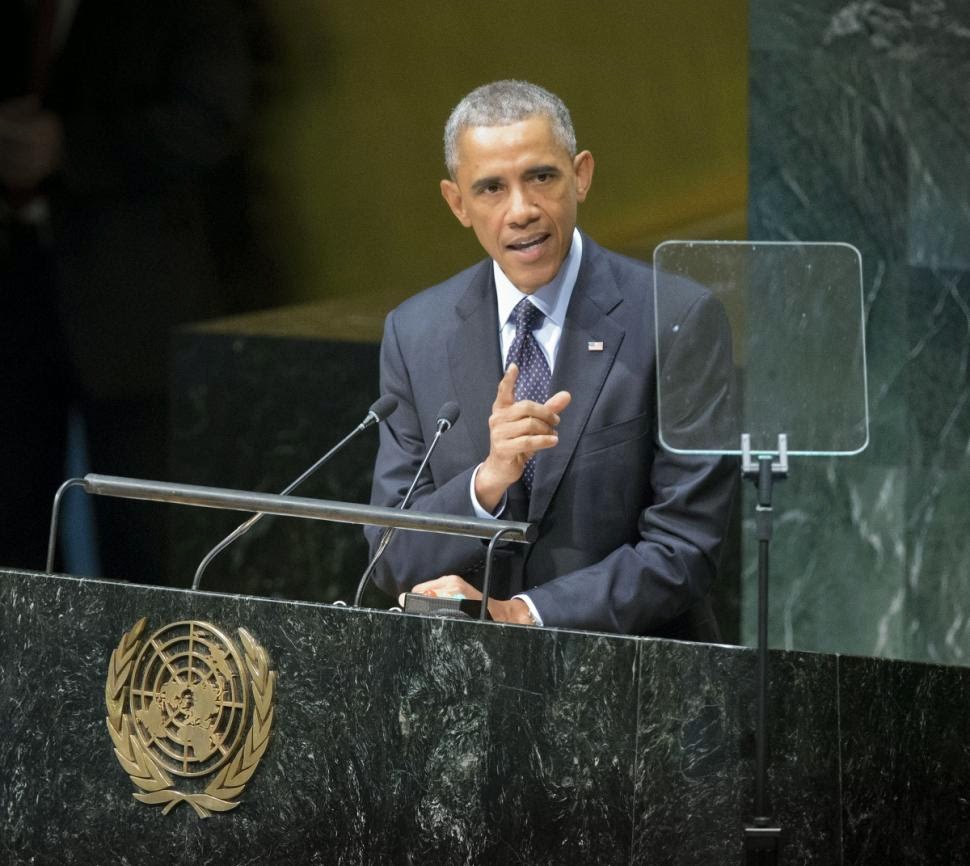 I caught just a little bit of Barack Obama's speech to the UN and I have to tell you, I was disgusted! First off, I've grown really tired of his teleprompter speaking style. It grates on you. He speaks the words he reads and you know damn well that he has absolutely no emotional investment in what he's saying. He's a thespian of the lowest order. Now, if he came out and actually spoke on his own from prepared notes, I might think otherwise. But no, that might make the mask slip and we would be able to see who Barack Obama really is.

Why in the world would he even bring up Ferguson, MO? Granted, the lamestream media made sure that story became an international event, but why play it up? Is that intended to put us on the same moral footing as the genocide going on at the hands of ISIS?

Secondly, and this really bugged me, why chastise Israel as not being committed enough to peace? In a nutshell, he puts Israel on a moral equivalence with the Gaza Strip and Hamas? Our only, albeit fading, ally in the Middle East. Obama proves he's an anti-Semite at every turn!

Barack Obama is an absolute disgrace. There were other elements of his speech that I didn't like, especially his bloviating BS about climate change, but the bottom line is this: any speech Barack Obama gives to the United Nations is designed to appease the dictators present and not represent the people of the United States. But then again, you already knew that, right?

Mark my words! Obama's next gig is going to be the United Nations. At that point, we need to kick that obscene organization out of the United States and quit funding them!
Posted by ehvogel at 7:25 PM 2 comments
Labels: obama, United Nations 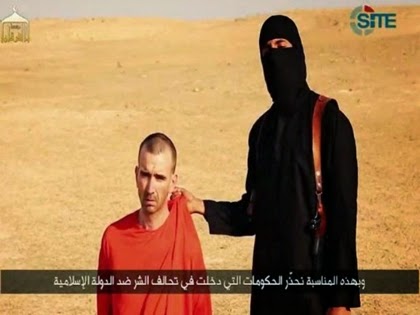 Do you sense the drip, drip, drip of ISIS beheadings?

We know that they're plugged into social media, which means that they certainly saw Obama's pathetic speech this week. So, what do they do?

They release another beheading video.

These guys are toying with us (the United States). They want nothing more than to drag the U.S. and Great Britain into Iraq. Why?

I thing they've figured out that the U.S. and Great Britain are basically going to do nothing to stop this. Sure, we'll drop some bombs and trumpet our successes in the mainstream media, but, behind the scenes, ISIS will just pick another person to behead.

There is only one way to answer ISIS. BEHEAD them! Bomb them within an inch of their camcorders. Let them record the "dastardly" deeds that the bombing has delivered to them and then wait for an international outcry of "war crimes"! When that happens, bomb them some more, saying
"We win, they lose".

There's only ONE way for this to end. Either they continue to post beheading videos on YouTube or we destroy them ALL!