What Does the White House Really Fear?

Call me cynical. This piece at Breitbart.com suggests the Obama administration is fearful of an impeachment push by Congress.

I think they don't speak about their fears. Lending credence to impeachment talk suggests that the Obama administration welcomes it. My cynical mind thinks that if they can goad the Republican-controlled House into initiating impeachment proceedings, it will help them politically in this year's elections.

Consider this: if the House initiates impeachment proceedings, the White House will rail against it as an extremely partisan effort to undermine his presidency, which, of course, would be true! But how would that play in this year's elections? It just might energize the Democrat base to counter an impeachment effort.

Personally, I think the process of impeachment should be left to the next Congress. If we can assume that Republicans win control of the Senate and maintain the House of Representatives, then I think we've got a good brew for impeachment.

In the meantime, I highly encourage members of Congress to talk about it. There's nothing like keeping the narrative going and goading the White House to go ahead and "make my day"! That day can play out after Harry Reid has his ass kicked in the 2014 elections!
Posted by ehvogel at 4:49 PM 0 comments
Labels: 2014 elections, impeachment, obama

Notice that Benjamin Netanyahu doesn't need a teleprompter to deliver his salient points.

It's Time for W to Speak Out! 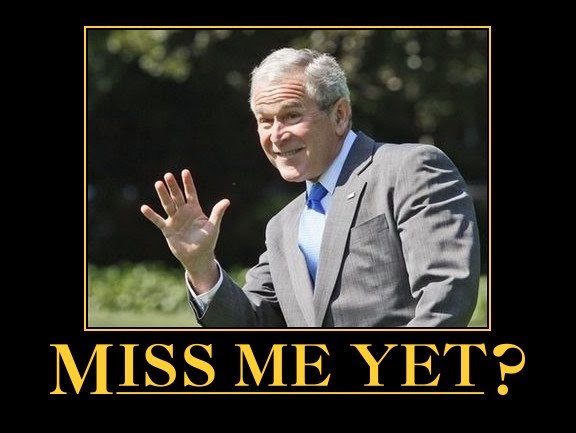 You know what, I liked George Bush. Hell, I'm a Texan! That alone qualifies me as a supporter of "W".

Conservatism, or even "compassionate conservatism", is not something that becomes a narrative in the mainstream media. It must be talked about constantly!

For 8 years, "W" was in the White House. He could have espoused conservative principles in defense of all the attacks on him, but instead, he chose to "rise above it" and hold the White House and his position as President above the fray. Unfortunately, he is no longer above it all and is reviled as the source of all Barack Obama's failures. What an unbelievable narrative!

Barack Obama has done more to undermine our principles of government and demean the office of President of the United States than any President in the history of our nation! So much about a thought to "rise above it"!

Perhaps W's persistence in maintaining the decorum of office had an expiration date. An expiration date, I say, that expired the minute he transferred power to Barack Obama.

So now W enjoys his leisure, replacing his knees to be able to continue riding bikes. How virtuous! He can enjoy the camaraderie of the bike trail while watching our country go down the tubes...and say nothing.

Countless presidents are rolling over in their graves as they watch the disintegration of our country and all that they stood for. Just think about your life's work being unraveled and how YOU would feel!

Is it too much to ask a living President to defend our heritage and remind the people of the United States that we are much more than Barack Obama?

While I once thought that George Bush was the embodiment of a Texan, I now think of him as a worthless pussy. How sad! 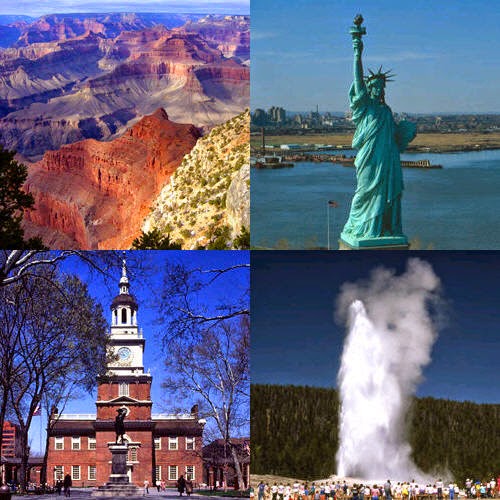 1. Something that comes or belongs to one by reason of birth; an inherited lot or portion: a heritage of poverty and suffering; a national heritage of honor, pride, and courage.

2. Something reserved for one: the heritage of the righteous.
3. Law.

a. Something that has been or may be inherited by legal descent or succession.
b. Any property, especially land, that devolves by right of inheritance.

Key word is noun. It's something that's tangible.

We in the United States of America have a heritage like no other country that has ever existed on the earth. We have a society built on the premise that all men are created equal and are endowed by their Creator with liberty, among other things.

Our Founders were completely accepting of the main premise of the Enlightenment.  They stood in their faith of God and determined that the country would be governed by the principle of individual liberty. That premise is now under assault!

An all-powerful government was the bane of the Founders' existence. They abhorred the thought of it! They sought to build a government that would ensure that the people of the United States would never be subject to the oppression that our Founders endured with England.

Our children laugh at our admonitions to be wary of an all-powerful government. They do not know and have not been taught about the lessons of the past. And yet here we are.

Our government attempts to govern all we do. I can give you a litany, based on current Cabinet positions: Agriculture, Commerce, Defense, Education, Energy, Heath and Human Services, Homeland Security, Housing and Urban Development, Interior, Justice, Labor, State, Transportation, Treasury and Veterans Affairs.

Why is the federal government allowed to be involved in such things?

Because we've been asleep at the switch and we have not taught our children to beware! 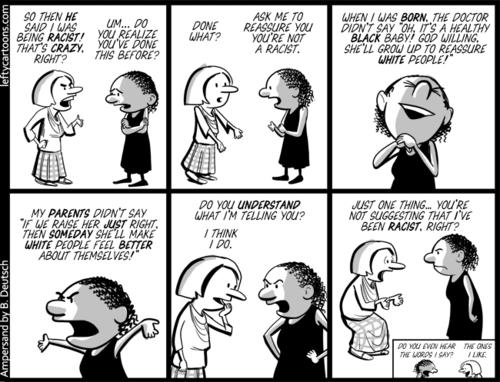 I'm continually amazed at people I've known that grew up in "privileged" households. Why do they often turn to socialist thinking? Their parents gave them EVERYTHING, and then some!

I'm not denying their prosperity, I'm just trying to understand their leftist leanings. Why?

I could name people from my childhood, but what's the point? What is it about them that they think that they should dictate to everyone else. Guilt?
Posted by ehvogel at 7:56 PM 0 comments
Labels: Leftists, Privilege

America: Imagine the World Without Her 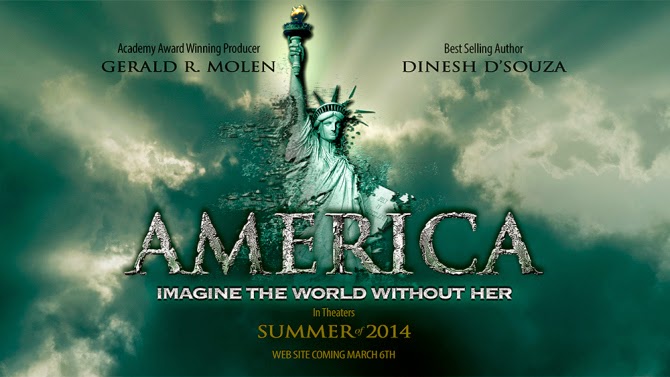 A buddy and I went to see the movie this afternoon. I posted it on my Facebook page and I here is the first comment I got: 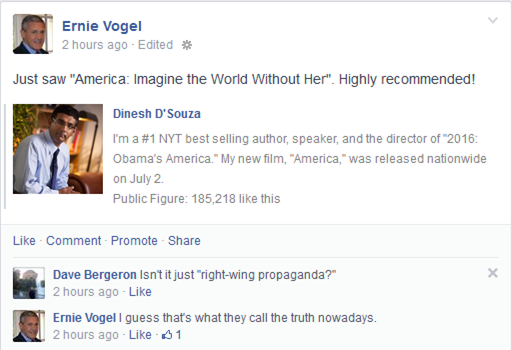 Sad, right? And Dave is a conservative. But he raises a good point. We've lost the narrative when the mainstream media can paint a movie as right-wing propaganda, when really, it's just the truth!

The left has stolen the ability to "frame" the narrative.

Is there any hope that the American populace will wake up?
Posted by ehvogel at 8:18 PM 0 comments
Labels: America, left-wing, narrative

What did you expect? Chocolate? 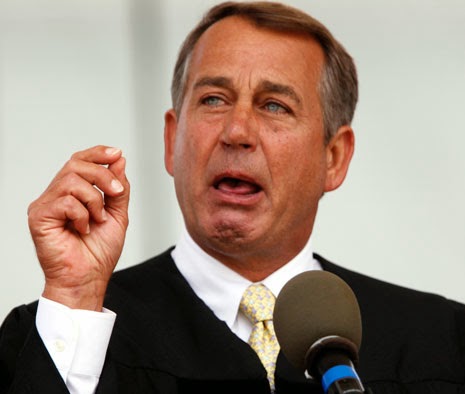 This guy has no idea what's going on. Left up to him, our country will become a leftist nation, because it's just "too hard" to do what needs to be done. 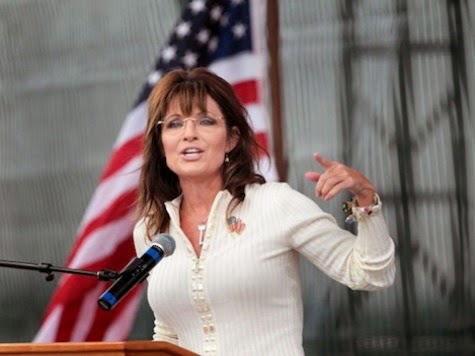 
Enough is enough of the years of abuse from this president. His unsecured border crisis is the last straw that makes the battered wife say, “no mas.”

Without borders, there is no nation. Obama knows this. Opening our borders to a flood of illegal immigrants is deliberate. This is his fundamental transformation of America. It’s the only promise he has kept. Discrediting the price paid for America’s exceptionalism over our history, he’s given false hope and taxpayer’s change to millions of foreign nationals who want to sneak into our country illegally. Because of Obama’s purposeful dereliction of duty an untold number of illegal immigrants will kick off their shoes and come on in, competing against Americans for our jobs and limited public services. There is no end in sight as our president prioritizes parties over doing the job he was hired by voters to do. Securing our borders is obviously fundamental here; it goes without saying that it is his job.

The federal government is trillions of dollars in debt; many cities are on the verge of insolvency; our overrun healthcare system, police forces, social services, schools, and our unsustainably generous welfare-state programs are stretched to the max. We average Americans know that. So why has this issue been allowed to be turned upside down with our “leader” creating such unsafe conditions while at the same time obstructing any economic recovery by creating more dependents than he allows producers? His friendly wealthy bipartisan elite, who want cheap foreign labor and can afford for themselves the best “border security” money can buy in their own exclusive communities, do not care that Obama tapped us out.

Have faith that average American workers – native-born and wonderful legal immigrants of all races, backgrounds, and political parties – do care because we’re the ones getting screwed as we’re forced to follow all our government’s rules while others are not required to do so. Many now feel like strangers in their own land. It’s the American worker who is forced to deal with Obama’s latest crisis with our hard-earned tax dollars while middle class wages decrease, sustainable jobs get more scarce, and communities become unrecognizable and bankrupted due to Obama’s flood of illegal immigration.

Who’s looking out for the American workers? Who has their backs? Who fights for them?

President Obama’s rewarding of lawlessness, including his own, is the foundational problem here. It’s not going to get better, and in fact irreparable harm can be done in this lame-duck term as he continues to make up his own laws as he goes along, and, mark my words, will next meddle in the U.S. Court System with appointments that will forever change the basic interpretation of our Constitution’s role in protecting our rights.

It’s time to impeach; and on behalf of American workers and legal immigrants of all backgrounds, we should vehemently oppose any politician on the left or right who would hesitate in voting for articles of impeachment.

The many impeachable offenses of Barack Obama can no longer be ignored. If after all this he’s not impeachable, then no one is.