I remember when this "song" aired back when I was a kid. I always thought it was funny and I remember my parents being tickled at it as well.

Any thought on whether or not this "song" would air today?

Time to watch the Rasmussen Presidential Approval Index over the next few days. Obama experienced a 5 point drop in the index today. Keep in mind that Rasmussen uses a 3 day moving average. What that means is that the first poll after the so-called healthcare summit caused a significant drop. This probably signals further drops over the next three days. Stay tuned! 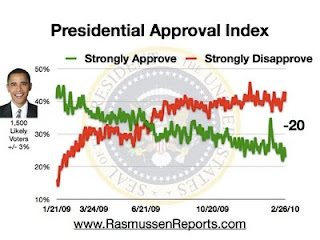 The real question is this: How much worse must Obama's approval numbers get before he abandons his plans to "reform" healthcare?
Posted by ehvogel at 6:29 PM 2 comments

In a fit of despair, I deleted my Twitter account. I'm in the process of getting it restored, but it may take some time. I must admit that I'd had it, thinking that my puny presence on Twitter and limited blog presence was having no impact on the swirl of events that defines the Obama administration, events that seem to diminish our liberty with each passing day.

What sent me over the edge was the whole Rush Limbaugh/NFL fiasco. What hit so close to home was the fact that Jimmy Irsay, the owner of the Indianapolis Colts, took it upon himself to disparage Rush and state his opposition to allowing Rush to "join the club". I have been a fan of the Indianapolis Colts since they first moved to Indianapolis. I had moved to Indianapolis in December of 2003 to begin a job with American Fletcher National Bank as a commercial loan officer. Our offices were located on Monument Circle and it was a fairly short walk to the old Hoosier Dome, where the Colts were introduced to the city in January of 2004, after their infamous move from Baltimore.

My co-workers and I went to the Hoosier Dome when the Colts were introduced that day in 2004 and the city was in a state of euphoria over their new team. Although I did not opt for season tickets, seats were not hard to come by. I attended numerous games and the highlight game of my time in Indianapolis was the game played on Monday night, October 31, 1988. This was the very first time that the "Indianapolis" Colts had been featured on Monday Night Football and the place was rocking! Eric Dickerson ran wild and the Colts beat the Denver Broncos and John Elway. It was a blast to be there and a cherished memory.

Fast-forward almost twenty years and I find myself in the Dallas area. I moved here in 1995 to pursue a job with GTE, which ended up turning into Verizon while I was there. My love of the Colts didn't die. I would cajole the local sports bar to carry the game on Sundays, because the Colts just didn't command a regular place on national TV. That all changed when Peyton Manning was drafted as the quarterback. Needless to say, the Colts have had a phenomenal run while in Peyton's hands and I have followed them every step of the way. Until this year.

Although I became a subscriber to the NFL Sunday Ticket on DirecTV several years ago (to watch ALL the Colts games), my time spent watching the Colts is now diminished. The owner decided to disparage Rush Limbaugh and by doing so has disparaged me and my political views. It was in Indianapolis that I first started listening to Rush and I think it was in 1988, when his program was syndicated and went national. It may have been around the same time that I attended the Colts' Monday night game.

I sent Jimmy Irsay an email and told him that I was a Colts' fan no longer. In berating Rush, he also berated me. After the initial shock of reading his words, I realized that I was a pawn as a fan. A marketing target and hopeful contributor to all-things NFL. I have a collection of Colts hats and numerous paraphernalia about the Colts to suggest that I have contributed hard-earned dollars to the NFL cause. No longer.

My subscription to the NFL Sunday Ticket has been bought and paid for this year. It will be the last. I opted out of two online NFL pools, even though I was leading both by substantial margins. Not another nickel will go to the coffers of the NFL! Nor will I support or promote any website that caters to them. I AM DONE!

What really set me off was the cover to Parade Magazine last Sunday. On the cover was Roger Goodall, the current commissioner of the NFL. The article praised his efforts to minimize the effects of negative publicity resulting from player misconduct. What wasn't said in the article was his own opposition to Rush Limbaugh's bid as a partial owner of the St. Louis Rams. Goodall sided with Jimmy Irsay in opposing a citizen's right to invest in something they were passionate about.

Well, I'm pretty passionate about my love of this country and all the things we have stood for over the years. I will not support the NFL if they are telling me that my beliefs disqualify me from being a "true fan".

I have crossed the Rubicon!

True to my word, I have officially canceled my DirecTV service. As of last Friday, I am now a customer of Verizon Fios TV. It took me the better part of Saturday to completely re-connect everything to my satisfaction (Thank you Radio Shack), but it is done.
Posted by ehvogel at 7:00 PM 2 comments 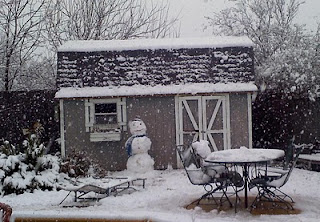 Those three words usually bring a derisive attitude from anyone that lives on the east or "left" coast. "How mundane, how backward, how crude"! In other words, to us in the hinterland, how exhilarating!

I watched a PBS special last night about the birth of our national parks. It was produced by the same guy that did "The Civil War" (Ken Burns), arguably the best documentary that has ever been produced. What it talked about was the Theodore Roosevelt years, in part. Primarily, it talked about Teddy's passion with the great "outdoors". The special left me spell-bound and ready to take a hike into the wilderness with my son and anyone else that want to brave the elements.

In a word, I can describe an overnight hike in the Grand Tetons as "experiential". That was something I did back in 1979. I took my then girl-friend to go hiking up Death Canyon in the Grand Tetons. I had planned the trip for weeks and thought I had covered all the bases in my preparation. What I hadn't anticipated was her unwillingness to break-in her hiking boots. It made the trek a little agonizing for her (to say the very least) and it curtailed my plans for multiple nights out. What it didn't do was take away from the memory of the experience. The question is: Why?

Now, to provide a little background, I remember going hunting and fishing with my father before he died. Those memories have never left me, even though he died when I was only 16. We never hunted for more than rabbit and our fishing trips always revolved around bluegills and perch, but that hasn't seemed to affect my memories of those trips. The main memory is of being with my father in an environment of "us against nature", something that I yearn for with my son and hope to fulfill.

In reading Sarah Palin's book "Going Rogue", I was immediately transported back to those times with my father. My absolute favorite part of the book was in her describing the trips with her father into the "us against nature" environment. Perhaps that is why I am so intrigued with her. Her experiences with nature and her ability to recount it as a positive life's experience are telling to me. It is something we are inspired to provide to our own sons and daughters.

I have no doubt that Sarah Palin has already captured her children's hearts with multiple trips into the "us against nature" environment. I envy her ability to do that in Alaska. Perhaps I should have forgone my experience in the city, pursuing a career in accounting. Perhaps I would have been better-served to take up the life of an Alaskan and learned the ins and outs of life in the wilderness.

But alas, I'm an accountant living in Texas, far removed from the memories of my Indiana past. And Alaska is out of the question now, having to steer a teenage youngster toward a fulfilling future.

I can only hope that the future contains some huntin', fishin' and campin'. That may be the thing that connects my son to me forever, as it did with me and my father.