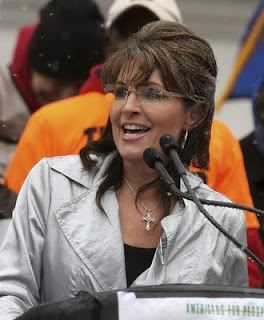 Sarah Palin delivered a rousing speech to the Madison Tea Party today. It was only remotely reminiscent of her acceptance speech at the 2008 Republican Convention. Today's speech was much more in keeping with Sarah's Mama Grizzly image. She went after Obama with unflinching candor and delivered some stinging barbs. She also was not deterred from going after the "Republican establishment", in her words, and lambasted the latest compromise on the 2011 budget as failing to deliver on the promises of the 2010 election.

This speech could best be described as Sarah-Unplugged. It delivered a stinging rebuke to the union leaders that have cast Madison as the centerpiece of Obama's world vision and spoke of the Tea Party as the voice of America. This was as close to a campaign speech that I have ever seen her deliver, hence the comparison to 2008.

This was not the Sarah Palin who has worked hard to deliver thoughtful speeches to enhance her bona fides in the world of national politics. This was a tit-for-tat response to Obama's partisanship, as delivered in his deficit-reduction speech on Wednesday. In it, Obama targeted Republican efforts toward spending reductions and overtly focused on Paul Ryan, lambasting his and the Republican's plans as being against the aging, women and the less-advantaged.

Sarah Pain ripped into Obama's characterization of Paul Ryan's plan and left no doubt about her feelings when she said of The White House: "you lie"! She called out Obama for his lack of leadership and mocked him for his use of the terms "hope" and "change". This was the most direct attack on Obama that I have seen Sarah Palin deliver since her acceptance speech at the GOP Convention.

As she wound down her speech, she implored the Madison Tea Party to consider itself as the beginning of the 2012 Presidential campaign. She invoked a well-accepted battle cry of "Game On" and compared it to the spirit of the Green Bay Packers' Super Bowl victory to rally those in attendance.

I'm awaiting a transcript of her speech and will update this post as soon as it is available. I'm sure videos of her speech will be available as well and they are well-worth your time to watch. This speech was definitely history in the making.

UPDATE:
Here is a link to Sarah's speech on Breitbart.tv